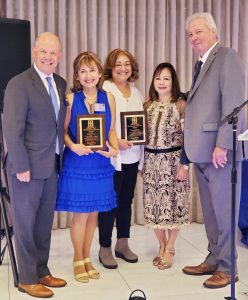 Each year, Kiwanis International hosts an official District Governor Visit for Division 3, representing Kiwanis clubs across the California-Nevada-Hawaii District. A highlight of the visit is a ceremony to recognize exemplary volunteer service to Kiwanis and the community.
Recently, the Kiwanis Club de La Cañada was recognized with the 2020-2021 Distinguished Service Awards given to Dennis Fors, Trish McRae and Alice Perez.

Held in Glendale, CAL-NEV-HA 2020-21, District Governor Gary Gray chaired the event and was joined by Lt. Gov. Tina Tabora-Lim, along with former Lt. Gov. Pat Liddell in 2001-02 as master of ceremonies.
Returning to the district governor’s official visit last year, three members of Club Kiwanis de La Cañada received 2019-2020 awards, which had not been officially presented due to the pandemic. Diane Della Valle and Fred Schooley both received Distinguished Service Awards and Nancy Leininger received the Youth Service Award.
Fors, president of the Kiwanis Club of La Cañada, was presented with his award by fellow Kiwanian Mary Gant, who recounted his leadership qualities. Fors became interim president in 2019, then the COVID lockdown hit, banning face-to-face meetings. Fors took action, orchestrating zoom meetings and ushering in the new community working groups, membership and fundraising.
Under Fors’ leadership, the club reached out to nursing homes, providing residents with much appreciated games and supplies. The club also co-sponsored the first LCF Trails Game. New social outlets, in line with LA County health guidelines, have also been launched to engage members in hiking, cooking, golfing, and reading, paving the way for a more robust club aimed at improve the member experience.
Trish McRae, vice president of programs for the local Kiwanis club, was recognized for developing the club’s website, using social media and videos to introduce the club and promoting weekly guest speakers. A board member since 2018, McRae has served on various committees using his skills in marketing, advertising, design and event planning. McRae is also actively involved in other clubs and is entering her second term as president of the La Cañada Junior Girls’ Club. She also sits on the board of directors of the LCF Community Scholarship Foundation, La Cañada Flintridge Trails Council, and is an Ambassador for the Chamber of Commerce and the CFL Community Association.

Alice Perez joined the local Kiwanis Board of Directors in 2019 and serves as President of Advertising. Perez has found his niche of giving back by writing articles for local newspapers and magazines and using photography to present programs such as Kiwanis Terrific Kids, the literacy program, wine and food tasting events and, more recently the LCF Trails game. co-sponsored by Kiwanis and LCF Trails Council.
Currently, Perez is the treasurer of the Junior Women’s Club and is also their public relations coordinator. Among her other activities, she is an Ambassador for the CFL Chamber of Commerce and the Community Scholarship Foundation Scholarship Liaison.
Fred Schooley joined Club Kiwanis in 2005 and has provided exceptional service over the years, having served as club president in 2014-15. Since then he has set the tone for donors and has been honored by the club by renaming the Endowment Fund to Moulton-Schooley Fund. The fund provides vital resources to help support a wide range of Kiwanis community efforts, including a variety of youth programs. Through Schooley’s enthusiasm and dedication, he has inspired other club members to donate to the fund as well, the goal of which is to propel the region’s youth to their next level of achievement.
Diane Della Valle, a member of Kiwanis since 2002, served as president in 2007-08 and is the past chair of LC’s Kiwanis Club International Understanding Committee, where she championed the successful multi-year effort to move beyond Project Eliminate, including the goal is to eliminate maternal and neonatal tetanus worldwide through preventive vaccinations. Among her civic activities, she is an ambassador for the Chamber of Commerce.
Nancy Leininger continues to use her decades of experience as a former elementary school teacher to inspire children to raise their educational goals. Leininger has masterfully led the club’s signature Terrific Kids program, held three times per school year, working with all grade 6 teachers in the La Cañada Unified School District to identify students who deserve special recognition for their positive impact in the classroom. The children then receive prizes at school assemblies and are greeted with their parents at a Kiwanis lunch.
If local residents “are interested in making friends and giving back while having fun, Club Kiwanis de La Cañada invites you to attend a meeting held every Wednesday at noon, with the” Guest Speaker of the Week “program. “said a Kiwanis spokesperson. . To receive an invitation, email [email protected] or visit lacanadakiwanis.org.